That new banner is up, and something of mine is up too :P

Ah, would have posted this earlier had I not spent some time out. Well, how often do I talk about my outings out in downtown? First let’s get down to business.

My new banner is finally up, just hours after the scans went up. Again, I was working on this after lunch, when my schedule had to shift an entire day, so some of that time was spent over at the SM Megamall. As you can see, I did 3 nude filters in almost 2 hours. Definitely a new record for me, I used to think doing 1 a day was overkill, but 3? GLORIOUS XD

But eh? That’s it? Where’s the complete nude filters at the Sankaku Channel, moeren, insertnextbestimagesitehere? I know this is going to sound very weird, complicated, extremely strange, but…. I will not be releasing them, at all for that matter. Why? WHYYYYYYY you ask? Know that this isn’t about exclusivity to my blog, or whatever, heck this is my first update since…. whatever, the point is, I have 2 reasons, one of them is personal, but the other one is obvious and hilarious: the nude filtered versions of the Megami/Nyantype scans you see in my banner? Yeah, just those 3 girls on the right. I have a rule, ja, and that is “do not upload incomplete work”, and as you might know about the source scans that I have used, the ZnT scan also has Louise in it, the Guilty Crown scan has Inori and Tsugumi, and of course the Ano Natsu scan has Lemon, Kanna and Mio in it. I of course did not ‘shop those girls, hence, “incomplete” work. But…. maybe if you folks donate time to me, I miiiiiiiight reconsider 😛

Speaking of my time outside, I know I don’t talk about it much, but this time was entertaining as it was enlightening. First off, the Power Mac store in the CyberZone at SM Megamall, one of the iPads was not operational: 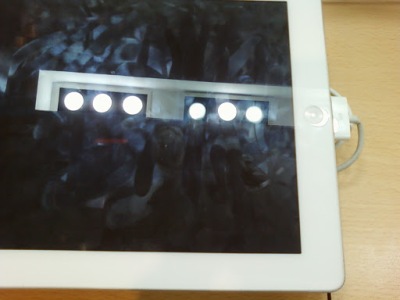 Notice the red bar on the screen, which is the dead battery indicator. 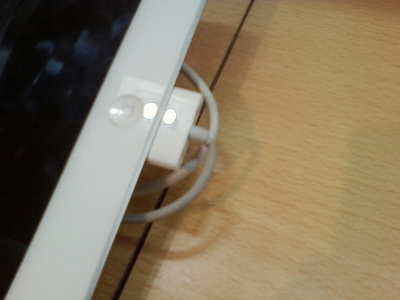 Yep, power cord is funked XD. So I had to scoot over to a vacate one (a loli was playing with the black iPad), and one reason why I had to mention all this, is because this is the first time I ever saw the iPad in the flesh, and in operation. All I was amused about was how thin the thing was. But then the other Android tablets I held were like that too, so 😛 By the way, I took a portrait photo of myself on one of those iPads. Darn, forgot to delete the incriminating evidence!

Speaking of loli’s *cough* I got a funny true story. When I was exfil-ing the mall, a little girl was running around waaah waaah, and you know how they have those mall directories near the entrance/exit? Well, this one is a giant touchscreen, and this girl runs over to it screaming and then she takes that little hand of hers and slams her palm onto the screen. Man, I had to laugh so hard because the screen rejected that giant capacitive palm of hers XD…. she reminded me of Papa no Iu Koto Kikinasai’s Hinata XD

Yesterday I had a feeling that there was more to my previous post missing, but what the heck, it just showed up today so why not. 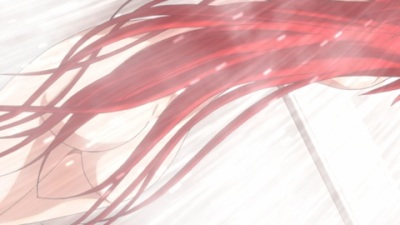 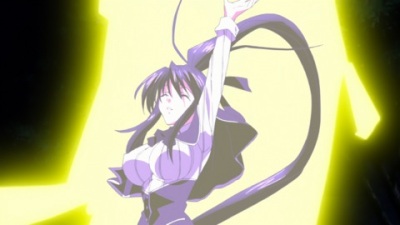 Somebody is beaming up Akenocchi…. 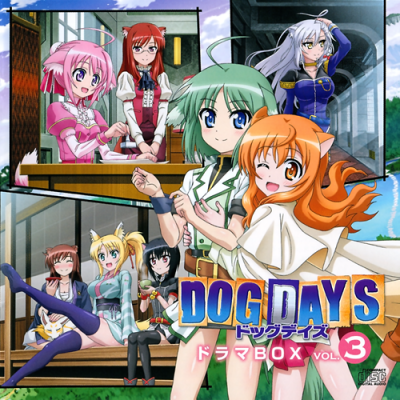 I just wanted to post this (DramaCD volume #3) cover because 1)I love Yukikaze 2)I love her “big ears” 3)and I love those delicious zettai ryouiki covered legs, ah I want to lick them, I want her to use her feet to play with something I have XD

Ani Site updates: the last week before this post….

I don’t understand. Why in the world would a country celebrate another country’s holiday? Seriously, let me give an extreme example…… Imagine if Iran celebrated the USA’s Independance Day. Never mind, my rants aren’t going to reach the government anyways….

One of the funny things about Yahoo these days is their comments. Yep, practically any website with comments are funny too. But the prevalent funny thing happening at Yahoo right now is the general consensus among readers that Yahoo should attach pictures to their new articles. The next best suggestion was to erase those damn video clips and let us actually read the articles, not watch them. In honor of my continued support of Yahoo since 1997, and a big grin to all their readers, I will post the pictures from the Flash file so that you don’t need to go to a computer that has Flash player just to see these pictures. 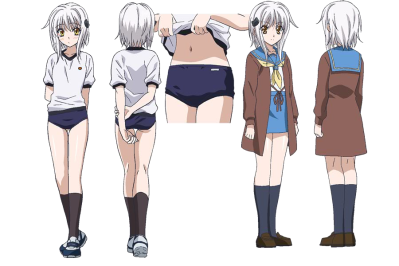 Say mister haremking.tv webmaster, are you still asleep buddy? Because for version 2, the main site still said Version 1 for a bit, but now the site says Version 3 but the flash page says Version 2….

Oh right, there’s nothing here. No Goods, from the start of the series, well into the entire Fall season, even till now, the Goods page remains “Coming Soon”. Why? Is this series not popular enough? To think they ended this series heavily laying on the Season 2 stuff….

Well, according to the main site, looks like they’ll be attending an event on March 31 through April 1. With Yui Horie in tow as well as some other cast members (I presume, since Miyano Mamoru is listed), maybe they’ll announce some Season 2 details? Hope so!

That’s from Hong Kong (which they imported from Japan of course), which in all my years of eating Pocky it’s the first I’ve seen of the gold box (I previously tasted only Strawberry and Regular Chocolate).

While we’re on the topic of snacks, I’ve been meaning to ask about this: 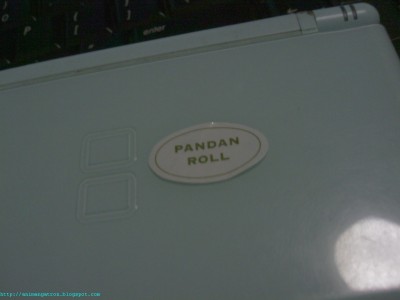 Sorry there’s no picture of the actual pastry, but that’s what it’s called, and if you’re wondering where it went, I ate it already 😛

I want to know what the ingredients are because it’s Green lol, of course I would choose that over Chocolate, Strawberry, mango etc. And what does Pandan mean? 😮 (This pastry is from Max’s Restaurant, the Corner Bakery that is)

Well, it’s one of those posts where I update on some things. Anything. Well, actually, I have an ongoing mess with one of my hard drives (S.M.A.R.T. area tells me it’s dead. Yeah, how in the heck is the HDD still good but the SMART part is dead?), so I have to scrap some photoshop ideas, and while that’s going I figured I might as well post something….

You know how there seems to be a lot of time if your computer is busy doing something, so I did some digging around my stuff and found this pencil board that came with the Stratos 4 OVA DVD (le hot spring ep :D) Now I remember why I was attracted to Infinite Stratos. Back in Winter 2011, somewhere in the back of my mind the fond memories of Stratos 4 must have compelled me to get into Infinite Stratos, which of course I eventually got to love the girls in that series as well. Well, look at her, aint she a beauty. GREEN TWINTAILS DAMNIT.

The other side of the pencil board. No, I did not photoshop that. Bandai did that themselves!

And of course it got me thinking. A lot of the DVD’s I bought have those extras in them, such as Galaxy Angel’s box set that included gashapon figures, or the Gravion DVD volume 1 which came with decals. Honestly, if they didn’t have those extras, I wouldn’t have had bought them, considering I was traveling at the time with hardly any space to transport them ($29 single discs, back in 2006-2007 from AAFES on US Army bases in Germany). English licensed nowadays should include little things like this, because I know it made me happy with my purchases, which I’m sure it made others happy too.

Speaking of photoshops, here’s a quickie (above). Yes, she is photoshopped. Take a closer look 😛 Now if I hadn’t had so much busy things to do, I’d photoshop the rest of her body 😀

And uh, last closing thing to lol at.
QUIZ: What is the mangatron’s favorite piece of a chicken?

Why, the thigh’s of course!!!
(Sorry for the lame pic. I know the leg isn’t attached to the thigh but what the heck, that is the thigh :P)

RE: the controversy pokes fun at Guilty Crown again

To celebrate (!) Gai’s death, I present the alternate universe:

Note: the joke might make more sense if you watched a certain communist sub >__>

Posted in anime humor, Guilty Crown, RE the controversy, Winter 2012

Something I forgot to mention last time is added to this post instead.

The preview for episode 02 is up, and if I had to be blunt, the story bit looks to be a snoozer. At least they threw in some fanservice, eh? XD Speaking of this series, I just realized it’s pronounced as Highschool D D….. and I always added an “x” when I say it 😛

Not sure if you folks remember, but the Ben-to BDVD extra’s used to be line art only (sorry, can’t find the images which I thought I saved.) Well they’re in color now, as well as a new Ayame Dakimakura just went up 😀

I know she’s not named Mizuho. I know she looks like a younger Mizuho Kusanagi (Ha! I got her last name right!). I know I like her, that’s for sure 😀