An interview with the mangatron about Teruya Eiko 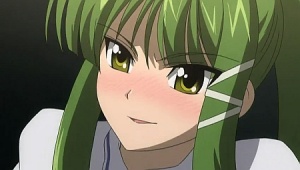 With my recent uncontrollable Teruya Eiko love I’ve been throwing around, I thought I’d explain a few things as to why the sudden interest in said girl.

I’ll interview myself in extreme fashion 😛

Q: So why the interest in a girl all of a sudden that you knew nothing about?
A: She has a number of likable points, main ones being a ponytail, green hair, stockings, miniskirt, nice deadly legs, and a forward attitude.

Q: Let’s go one by one. Why the ponytail?
A: It’s been known in the anime and gaming world that the Full Metal Panic Fumoffu episode 03 that features the pontail fetish guy was my favorite of that series (at its air date, it was known as episode 03 due to a couple of unaired episodes and the resulting un-uniformed naming scheme). The reason why that was my favorite was the blend of comedy and action, but even more so, it was the first known time that I got to see Tokiwa in a different hairstyle (ponytail). The reason why that left an impression on me is because I’m into twin tails, Tokiwa being one of them, and to see her in a ponytail, not only did it surprise me, but that led me to think, maybe it wasn’t the ponytail or the twin tails, but rather when a girl ties her hair up it rather puts a smile on my face. (I’m from Germany, and it was there that I saw so little tied hair that when a crush of mine back in 3rd grade put on a ponytail, I was about to confess on the spot) 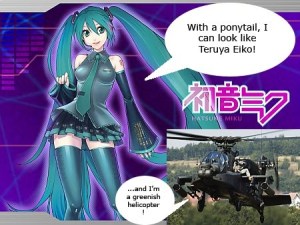 Q: Ok… so the green hair?
A: Actually, I’m an unspoken Hatsune Miku fan, who, you guessed it, has a number of the above traits that should of had me go crazy over her instead of Teruya Eiko. But the reason why I never really talked about her is because I know so little about her other than what she came from and what she does for a living, that I felt that if I ever wanted to talk about her, I’d have to know something other than her origins.  Thus the similarities between Eiko and Miku, two girls I know little about and yet I have a great opportunity to know more about Eiko non-novel wise. That, and being a student of military doctrine and strategy, I spent a large amount of time surrounded by military hardware and documentation, the intense amount of green stuck on me in which I just ended up liking it over all the other colors. Of course, another girl worthy mention is also one of my favorites: Ryofu Housen, another twin tailed, green haired girl who I also had the pleasure of completing a garage kit of.

Q: Military man, eh? so what about the stockings? Shouldn’t that be knee-socks?
A: As you know, I am from Germany, and at the time of my growing up there I do not recall it ever being called knee-socks but rather stockings. It goes back to the early to mid 90’s, this Underwear company started this public advertising campaign featuring, well, underwear. It was then that I for the first time saw a ridiculousy large image of a woman wearing nothing but bra, pantsu and those things covering her legs. Of course, I was rather shocked to see this, Germany at the time was run(or the dominant party) by CDU, a rather tame democratic party that I thought would have put a ban on that sort of advertising. It was then that I was looking out for the thing I became to know as Stockings, the wonderful cloth that beautifies the lengths of a woman.

Q: Well, that was rather informative. So the miniskirt?
A: Isn’t it obvious? As a lover of the lengths of a girl, the miniskirt is the perfect cloth to cover the lower part of a woman and yet leave the legs to our viewing pleasure. I’d go into detail about an amusing Yahoo article a few years back about “Why guys like miniskirts”, but in short: it looks great.

Q: The legs? Or I already know this?
A: Yes, you should know this already. I’m not a entirely big fan of large breasts or flat ones, nor am I a fan of whatever it is that’s not legs, but rather the beauty of legs is that they are a part of a girl that can move, and in a large number of positions, can be very exciting to look upon. For breasts, they are stationary and pretty much enjoyable in how you view the target. But for the legs, they are the ones that can look exciting at how they are moved and how you are viewing them, making it a double requirement. Just like breasts, legs can be covered [by underwear-style clothing] to be even more sexier, but breasts, not every girl has them at the large size, whilst every girl as we know has legs, and can look good with a little bit of clothing. This is why I’m known as a lover of girls: I don’t like a feature some of them have, but rather a feature they all have. There is of course those unseen/unfelt experiences of a girls legs, which is why I was rather interested what a leg bind like Teruya Eiko’s would feel like, but at the same time I know the only way to experience that is with hostile intent, so there goes the big question: to be leg wrapped, or to not be leg wrapped…

Q: Forward attitude? Is this an Eiko thing?
A: Actually, it’s probably because she’s placed in a series that screams harem but so far isn’t, that to see her attacking, close up attitude with dealing with situations that probably has me breathe that sigh of relief of seeing a nice change in a long time. As you might have known I’ve spent several years earlier recuperating from a nasty combination of food poisoning/stomach flu, and I spent a large part of that away from anime. As we know, anime is where green hair is pretty much the only place possible, as well as stockings, miniskirts, ponytails and twin tails. Upon my return to anime viewing, I didn’t really see this at all until now in an anime, finally a green haired, stocking covered, ponytail branding, normal sized breasted, miniskirt wearing girl that appears in a series I’m following, and the only other known girl to join Hatsune Miku with a similar feature set in those 3 long years of my sickness.

And there you have it. I hope you enjoyed this rare peek into the life of a man who likes a particular feature set of a girl, one who isn’t afraid to show the extreme thinking process of his mind, one who is so unique, even he doesn’t know it 😛 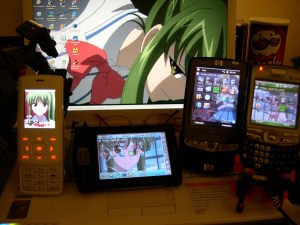 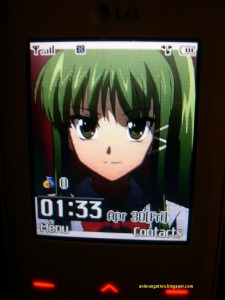 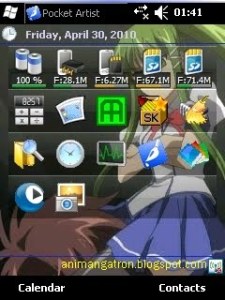 So, over at the Animesuki Forums I've been going head over mind for
the anime series Ichiban Ushiro No Dai Maou, so much so I've been
going nuts.

And now Teruya Eiko has invaded all of my devices. From my Laptop, to
my dumbphone (LG KG800), to my Palm TX, to my Palm Treo750, to my HP
iPAQ hx2415. With this, I should probably be the biggest Eiko fan
outside of Japan. I say, outside of Japan, because, knowing the Otaku
there, there's gotta be at least one out there who has more Teruya
Eiko stuff than I can look at with my own eyes (I've never set eyes on
any of the novels) It should be safe to claim the title since Teruya
Eiko has had little exposure outside of the novel's publishing
grounds, and well,… how many of you would plaster her on this many
devices? lol

I've been going for this “world's first-” kind of thing lately,
haven't I… it all started with that DS mod of mine.