Half Past Dead DS handhelds

I don’t know how it happened, but both my DS lite and my DS Phat bought the farm on March 2nd. I would suspect that sharing a single charger (one at a time of course) might have lengthened their demise, but they both had their share of problems. The DS Lite had a faulty digitizer (resulting in taps slightly off course), DS cartridge’s failing to load (not just one game, several of them) and my DS Phat had the aforementioned cartridge read problems as well. Who knows, maybe the fact that they are both the North American variants of their series (my imported DS Lite first production model from Japan still works) or maybe my custom charger (doesn’t explain cart read failures before the custom charger was used), but as usual, I simply looked online for “repair bricked DS” and I found what I was looking for: the blown fuse repairs. As always, for repairs like that one needs a soldering iron/gun, and as a traveler, how the heck am I supposed to bring that around. So I did the sane thing I always did, a couple of days ago, using my repair skills with the wrong tools, we have the following: 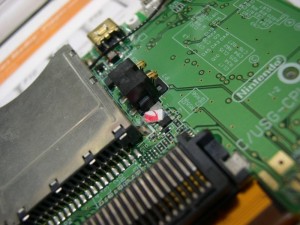 The DS Lite F2 Fuse repaired(below white rectangle object with red on it). Note the curved piece of metal below the red part, that is my non-solder work-around by having a metal ring bridge the fuse together. 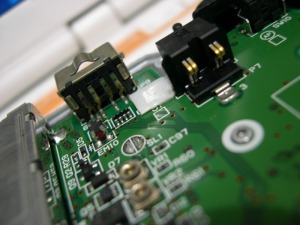 The DS Phat, unfortunately you cannot see the F2 fuse because I used the same sticky pad on the DS Lite to cover it to prevent the metal bridging ring from getting loose.
So now, my 3 DS’s live in harmony once again. I’ll admit when they both died I was already planning on scraping them for parts, for any potential future projects. Too bad, I would have been able to create that multiple screen GBAsp out of these parts lol… 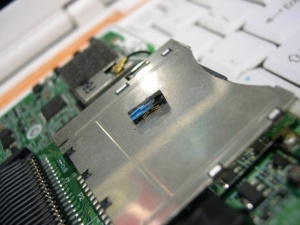 Look at the DS Lite’s poor power switch. Ironically I broke the broken one while taking the above pictures. Hey, at least it still works, I’ve read a number of discouraged consumers remarks about declaring the DS Lite dead after they find out their power switch is broken. I hope I’m an example of how one must never give up on dead devices until you see they partially emit smoke and start to feel hot in your hands.
Da Capo!