A update on the upcoming changes to my blogs

I decided to stick this here since it refers to Google, and I don’t want these words hosted on Google’s sites. (WordPress isn’t owned by Google, is it? >_>)

Apparently I was getting a lot of visitors to start the year. Yeah that’s right, I believe I was getting so much visitors, Google had to take a look at my blog and what do you know, those string of ecchi headers pushed the limit.

Note the rise of page views starting from January

Now, I understand I pushed the limits with my header images, so Google is not at fault here, but it’s also not entirely my fault either. I had no idea the policy applied to both RealD girls and 2D girls, as I mentioned earlier I showed no uncensored exposure of private parts in my pictures,  not to mention the only RealD girls are the BeautyLeg girls which did not violate Google’s policy of “suggestive posing of breasts” or whatever people call girls looking pretty. I feel that Google needs to make it clear about what constitutes as adult material, as many anime will have some fanservice scenes that unfortunately cannot be posted on a blog that serves Adsense, and yet they fall into the adult category simply because of Adsense’s vague description of what is adult material.

And that must be the problem Google had with my blog, I was having an increase in traffic as each day went on, till it became over 2000 visitors in 7 days. You can see now it doesn’t top 500 every 7 days anymore. My theories are that Google saw that my earnings were increasing, which of course set in motion their investigation into my blog, gee whiz apparently Ecchi sells, but Google didn’t think so so they permanently disabled ad serving to my blog. 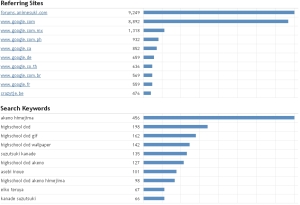 Proof that Ecchi sells: Note the referring sites, and the top 4 keywords, and connect this with the rise of pageviews starting from Jan 2012

As such, you might have noticed some of  my Highschool DxD posts ended up here, as it seems those were also the culprit despite yet again those being as censored as they originally have been (See above screenshot, Akeno Himejima nearly single-handedly increased my traffic). So my blogspot blog is back up in it’s original form, with no more Adsense, I can continue to push the boundaries between Adult and non-adult, but I will utilize Breaks more often now to properly label what post will have slightly NSFW content, and extreme NSFW content will remain on this WordPress blog.

More updates coming up, and hopefully those photoshops too ^^

This entry was posted in update and tagged Anime, Highschool DxD. Bookmark the permalink.