Whose phone is that?

So, with Heroman episode 14 having aired, I am really quick to piece things together in my brain, and this scene was a no-brainer simply because it is currently my active phone: 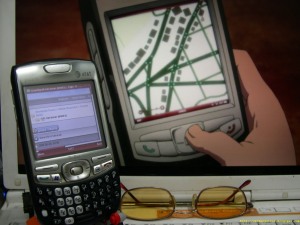 That phone Agent Hughes is using is a Palm designed series of the Treo line, whatever he exactly is using apparently is lost in the way of cartoonification. Why is this significant? I want to know who exactly thought the Treo is a great phone for field agents. Other notable agents to use a Treo: the movie “Eagle Eye“, with Zoe Perez using one, as well as 24 season 6, I believe episode 08 or 09, when Jack Bauer reads the message from Phillip.

Note to BONES: I know you’re a bit behind the times when you show American elements in Heroman, but using a Treo was just…. strange. Maybe I should be glad they didn’t use the iPhone as a template, which some would argue is the phone to symbolize common american use.